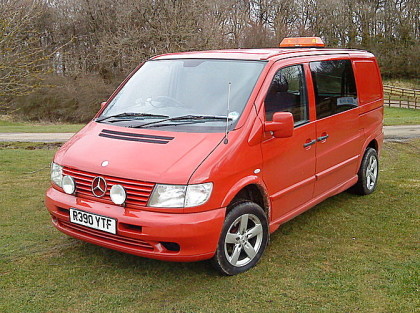 This was one of my projects in 2009, R reg Petrol/LPG panel van. Another wonderful purchase from Ebay @ £1100. With aircon and full service history. I fitted arches and side skirts purchased from www.rsbodykits.co.uk Ive fitted a double seat in the rear with seat belts. Tinted the side windows and fitted 16" alloy wheels from a 2004 SLK 2004 at a cost of £300. Had 4 new tyres fitted costing £140. I also had it converted to LPG.

Mercedes Vito. 1999, S reg. 2.3 Di. Another Ebay purchase in 2008. First I removed the bulkhead, fitted a single seat to the passenger side, fitted a better radio.  I bought some E class 17" alloys from a chap called Dave in Brigg. Needed some alloy wheel bolts from Mercedes, Part number ( MA638 401 01 71 - A35E81 Lug Bolts)   Because the wheels do stick out by about an inch I found a company who supplies the wheel arches and side skirts. Wheels arches £60.50 side skirts £79.99, free delivery. I fitted the arches and side skirts with no problems, very good quality. Painted in Jet Black from Churchill paints. The inside was carpeted, cupboards designed & fitted. Slide out bed designed and fitted, no seatbelts. Plenty of storage space under the bed.  I sold this van to a mate of mine in 2008 who lives in Thetford, he still has it and has done a few mods to it himself. 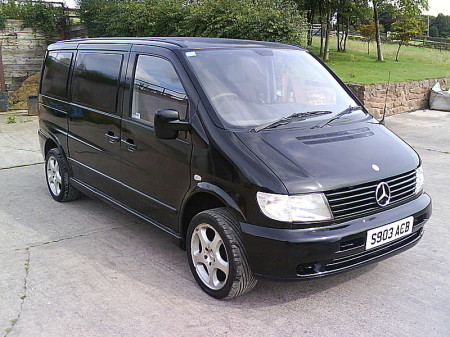